Azerbaijani activist Maryam Majidova is fighting to improve gender equality in her country, and address the daily challenges faced by women and girls.

Maryam Majidova is a co-founder of the Gender Hub social platform, which brings together advocacy groups, non-profit organisations, feminists, and human rights activists, to fight against gender-based violence. The platform also aims to empower women and girls and support them in overcoming gender-related challenges.

“I have had to fight against gender stereotypes and discrimination since my childhood, ever since I lost my father. At school and university, when I was successful, people would ask me about ‘the man’ behind me. They could not accept that a woman can succeed without a man’s support.

I believe that gender stereotypes have harmful effects on women’s capacity to develop their personal abilities, pursue their professional careers, and make choices about their lives. I decided to fight against these stereotypes, which, unfortunately, are dominant throughout Azerbaijan.

As a gender activist, trainer, and youth policy expert, I have been working on positive youth development for about ten years. During this period, I partnered with international organisations, including the United Nations, on projects supporting women’s participation in public and political life.

According to the National Survey on Violence Against Women in Azerbaijan, 24 per cent of women aged 15-59 had been subjected to violence by either a non-partner or an intimate partner. This is a national problem, and it should be on the top of the government’s agenda.

Key to preventing and addressing violence against women is the active engagement of men and boys. Having men speak out against gender-based violence will also contribute to changing society’s perceptions about gender roles and patriarchal norms.

A red card for violence against women

To raise awareness of the consequences of gender-based violence and the benefits of a gender-equal society, my colleagues and I organized a series of events across the country, using the hashtag #menengage, a key topic of the 2021 ‘16 Days of Activism’ campaign against gender-based violence, launched by the UN in Azerbaijan.

The UN partnered with an Azerbaijani football team, Neftchi FC, which agreed to play one of their league matches in orange jerseys featuring the slogan “Stop violence against women”. The UN also collaborated with local influencers who helped spread this slogan through traditional and social media.

It is difficult to achieve rapid changes with such a deeply rooted cultural and structural issue. Nevertheless, I am confident that these kinds of projects send the right message and help in the push to bring about the kind of change we dream of.
Sometimes, companies hire women because of quotas, for symbolic inclusivity, but I don’t want to be hired for the sake of numbers. I also believe that no one should tell a woman what she deserves, or how she should behave. I simply want women to have the same rights as men.” 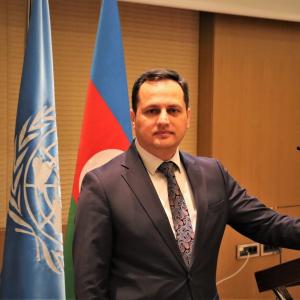