Op-ed by Vladanka Andreeva, the UN Resident Coordinator in Azerbaijan.

Today, on 2 March, we celebrate the 30th anniversary of Azerbaijan’s membership of the United Nations (UN). On this day in 1992, the UN General Assembly adopted resolution 46/230 at the 82nd plenary meeting of its 46th session in New York, during which Azerbaijan and eight other former Soviet republics became new members of the UN. In fact, the year 1992 saw the biggest single increase in UN membership since the wave of decolonization of 1960.

Azerbaijan, as newly independent state, faced extreme difficulties brought by the conflict in the early 1990s. Thus, in the  first years of the UN-Azerbaijan partnership, UN assistance was primarily focused on the immediate needs of refugees and internally displaced persons. UN Agencies provided food, health services, shelter and other non-food items to more than 600,000 IDPs and 200,000 refugees. The combined efforts of the Government, local communities and the international partners were crucial in preventing the most tragic consequences of large-scale displacement,  such as mass starvation, and epidemics.

Later, the UN continued its support to Azerbaijan with post-conflict rehabilitation and longer-term development needs. In a relatively short timeframe, Azerbaijan has transformed itself from a transition economy into an upper middle-income country with a high human development index. Between 1995 and 2019, the country’s Human Development Index value increased from 0.604 to 0.756, an increase of 25.2%. During this period, poverty rate in Azerbaijan decreased from 49.0% to 5%  and the country’s  Gross National Income per capita increased by about 79.4%.

Over the last 30 years, Azerbaijan has made remarkable progress in terms of economic growth and human development, and the UN-Azerbaijan relations have transitioned from assistance-based to partnership-based cooperation.

Since joining the UN, Azerbaijan has contributed to our collective commitment to sustainable development and continues to engage in a comprehensive and wide-reaching agenda under the principles and objectives set forth in the UN Charter. This was recognised at the global level when Azerbaijan was elected as a non-permanent member of the UN Security Council for a two-year term (2012-2013) by 155 member states.

After the outbreak of COVID-19, Azerbaijan has again demonstrated its commitment to multilateralism and shared responsibility contributing to the regional and global efforts to combat the pandemic. As the Chair of the Non-Aligned Movement, Azerbaijan initiated a Special Session of the UN General Assembly in response to COVID 19 and financially supported the global COVID-19 efforts.

Furthermore, with a rich tradition of multiculturalism and religious tolerance, Azerbaijan has assumed a role of encouraging intercultural dialogue and improved understanding between different nations and peoples through the hosting of a number of high-level events in recent years.

I am confident that with the launch of Azerbaijan 2030: National Priorities for socio-economic development Strategy, Azerbaijan will renew its aspirations to turn the country into an advanced economy with a high welfare society.

United Nations will continue supporting Azerbaijan’s efforts to achieve the Sustainable Development Goals, as well as build forward better and recover from the COVID-19 pandemic and the recent conflict.

In 2021, the UN Country Team and the Azerbaijani government signed the UN-Azerbaijan Sustainable Development Cooperation Framework for 2021-2025. This framework identified four main priorities for our partnership: promotion of inclusive growth that reduces vulnerability and builds resilience; stronger institutions for better public and social services; protection of the environment and addressing climate change; and empowerment of women and girls in every life sphere.

These are very ambitious targets, and to reach them we need accelerated actions and mobilization of all levels of society.  As Resident Coordinator, I will continue to lead the UN Family and work closely with the Government and people of Azerbaijan  on the design and implementation of a combination of integrated solutions that will translate these targets into measurable progress towards the Sustainable Development Goals.

We will continue to pursue a strategy that invests in people, in peace, in durable solutions, and in institutions that are responsive to the needs of the most vulnerable, which will help Azerbaijan build forward  stronger, more equitable and more prosperous society. 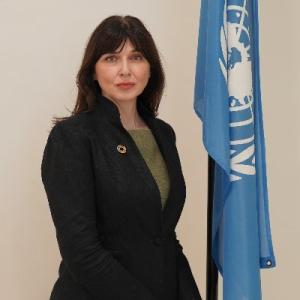